A great use case for AWS Lambda is running Cron Jobs. Instead of setting up a special one-off Cron server to run a simple task, we can just run the task on serverless nowadays. In this blog post, we’ll go over how to build a simple Cron Job with Jets, the Ruby Serverless Framework. As a useful practical example, we’ll create a job that backs up route53 records. This is quite handy when if you ever need it!

The jets new command has a few different modes: html, api, and job. We’ll use the handy job mode for this tutorial to create a minimal starter project designed to run jobs.

We’ve successfully generated a very minimal Jets project. It is interesting to note that in job mode, there’s is no database configured and prewarming is disabled. Feel that these are good default settings for job mode. We are ready to now add some job code.

To do a quick test let’s use jets console:

You can check out the deployed function in the Lambda console:

Since we’ve used a rate of 1 minute we can also see it running pretty quickly in the CloudWatch logs. It looks something like this:

Okay, now we can add the actual code that backs up the route53 records to s3.

For explanatory purposes, I’m going to focus on the code snippets that help to understand how the backup script works. The full source code is also on GitHub: jobs/backup_job.rb

The code essentially loops through all the hosted zones and takes a backup of all the route53 records for each hosted zone, saving them in JSON format.

We also added an iam_policy declaration. For the sake of this tutorial, we’re using a simple s3 policy to give us write access to s3. There is also a managed_iam_policy declaration to get route53 read-only access. Note that these iam policies apply for the deployed function on AWS Lambda. Locally, you’re using the IAM permissions of your IAM user.

There is also an environment variable S3_BUCKET to tell the script where to save the backup records. Let’s create a s3 bucket and also add S3_BUCKET to our .env file.

The backups are saved to an easily identifiable structure:

The number at the end is a page number in case the number of routes in a zone exceeds a single page of results. The full source code is available here again: tongueroo/jets-backup-route53

It is useful to first to test things locally.

Once the function completes successfully, let’s check our s3 bucket:

We’re ready to deploy it again:

After it deploys, let’s manually trigger the function in the Lambda console this time. You can use anything for the test event payload because the backup function doesn’t care. Click on the Test button to run the function.

We should see something like this after running the function: 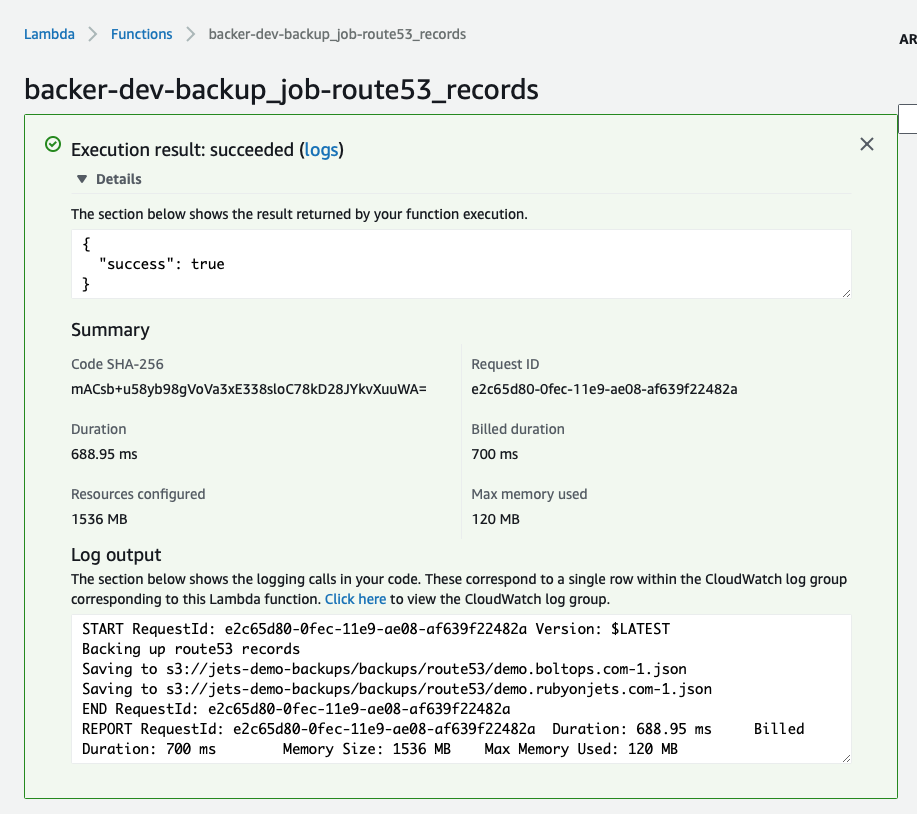 That’s it! We have successfully created a Ruby Serverless Cron Job with Jets! To boot, it backs up route53 records, which is pretty darn useful in case we ever need it. Usually, I enable versioning and a lifecycle policy on the s3 bucket also. This allows us to go back in history and get records from the past. This also makes the script simpler.

Hope you’ve enjoyed this article. If you find Ruby on Jets interesting, please give it ⭐️ on GitHub. I’d appreciate it. 👍