Update 2018/12/12: Official Ruby Support was announced at AWS re:Invent 2018 on Nov 29! Jets has switched over to it: Official AWS Ruby Support for Jets 🎉. This article has been updated to reflect official Ruby support, but video in the post is out-of-date and will be updated in time.

Ruby on Jets is a framework that allows you to build serverless applications in a beautiful language: Ruby. It includes everything needed to build and deploy applications to AWS Lambda. I love working with Rails, Ruby and AWS; and wanted to work with something similar in the serverless world. So I built Jets.

Many architectures can be built with Jets. Here’s an example traditional Web architecture that can easily be accomplished with Jets: 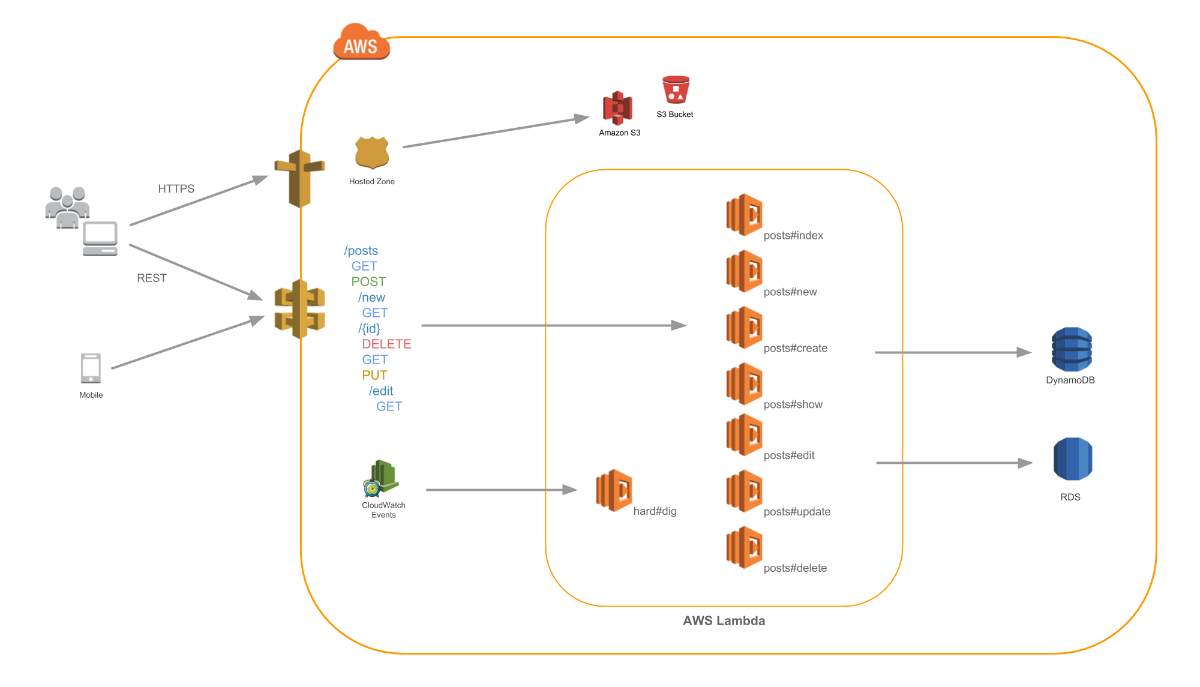 With Jets, you write code and Jets turns the code into AWS Lambda functions and API Gateway resources.

Jets supports writing simple AWS Lambda functions with Ruby. You define them in the app/functions folder. A function looks like this:

The default handler is named handler_function. The lambda function shows up in the Lambda console like this:

You can run the function in the AWS Lambda console and see the results: 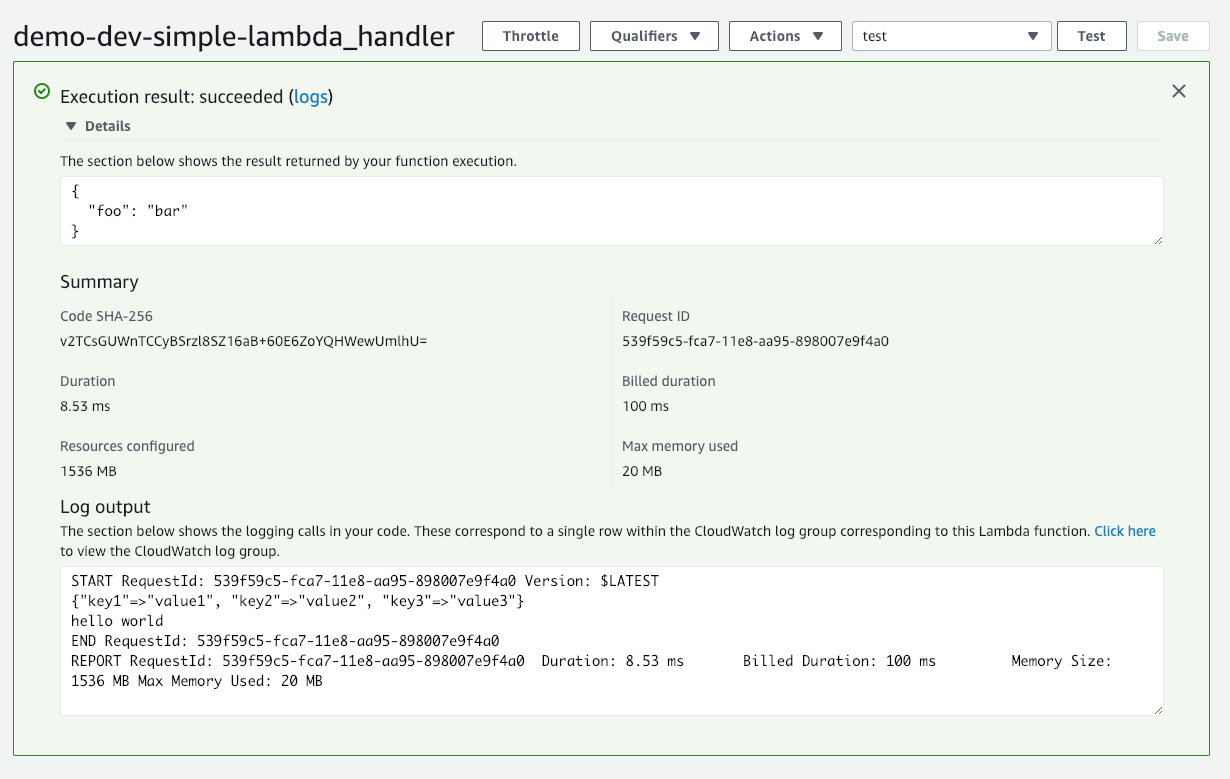 Though simple functions are supported by Jets, they do not add much value as other classes like Controllers and Jobs. These other classes add many conveniences and are more powerful to use. We’ll cover them next.

Here’s the first example of Jets code, a controller:

If you’re familiar with Rails and Sinatra, this will look familiar. Helper methods like params provide the parameters from the API Gateway event. The render method renders a Lambda Proxy structure back that API Gateway understands.

Jets takes each controller’s public methods and turns them into Lambda functions. Here are the functions in the Lambda console:

Jets takes the routes file, creates the corresponding API Gateway resources, and associates them with Lambda functions. Here are the routes in the API Gateway console: 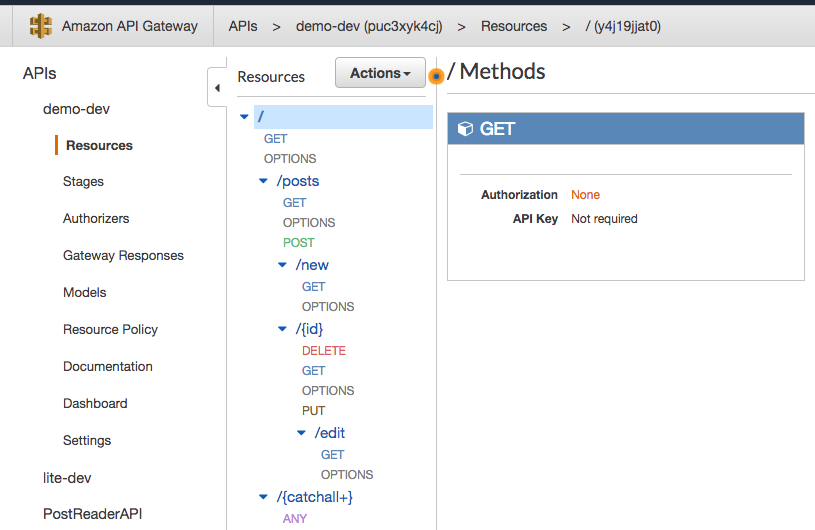 The code above creates Lambda functions and CloudWatch event rules to handle the scheduling of work.

You can check for the job functions in the Lambda console:

You can also see the associated CloudWatch Event Rule in the CloudWatch console:

We have the traditional MVC folders: app/models, app/views, and app/controllers. The config folder contains your application’s configuration settings. Further explanation for each folder is provided on the Project Structure docs.

Here are commands that generate a CRUD app to get you started:

The jets server command starts a server that mimics API Gateway so you can test locally. Open http://localhost:8888/posts and test out the CRUD site created from the scaffold.

When you’re ready, adjust your .env.development.remote with an RDS database and deploy to AWS Lambda. 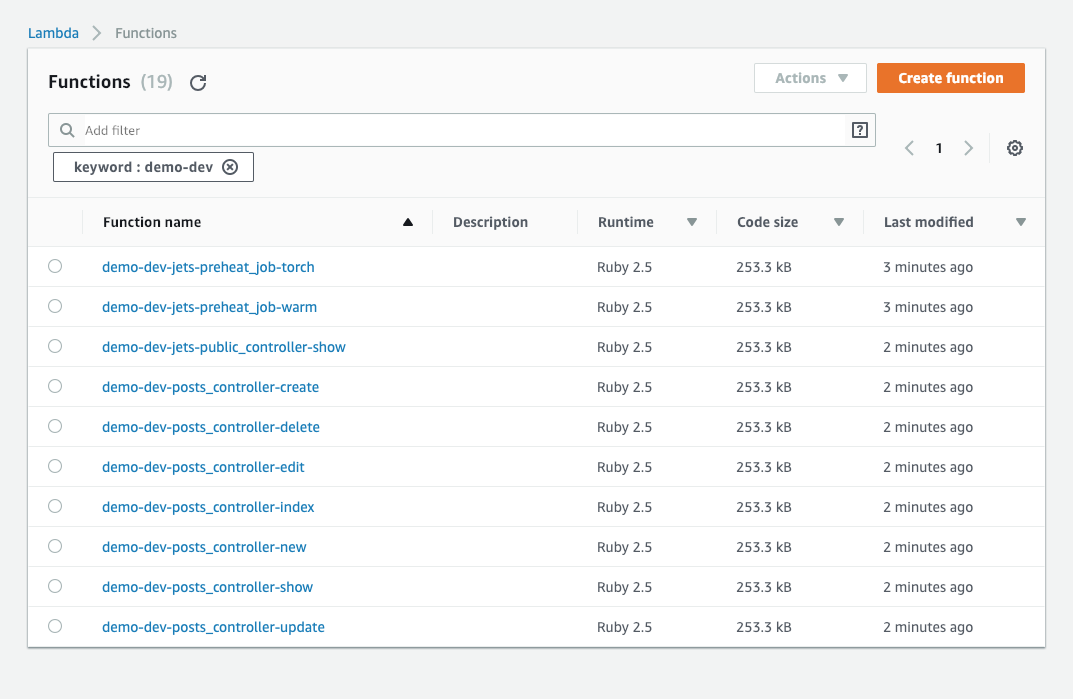 Here’s a live Demo of this tutorial. Note, the example records automatically get deleted and reseeded daily.

An interesting benefit of running applications on AWS Lambda is that you only get charged for actual requests. So extra environments are likely in the AWS free tier. You could do this:

You essentially get unlimited free environments, each of them taking a few minutes to provision.

With Serverless, you will might run into the quirky binary gem issue. Most gems are pure Ruby code and can be used as-is on AWS Lambda. However, some gems like nokogiri use compiled native extensions. So you must compile these binary gems to the Lambda target architecture for them to work. Jets uses Lambda Gems to resolve this and makes for a much more seamless and pleasant developer experience. The Beta for Lambda Gems is has been open. Early signups for Lambda Gems will receive a special offer for their support.

There’s lots more to cover, including Rails Support. Here’s a tutorial blog post: Jets Afterburner: Rails on AWS Lambda. Here’s also a summary of what Jets has to offer:

For more info check out the documentation site rubyonjets.com and the CLI reference.

Hoping to post more on Jets in the future. Feel that I’ve been lucky enough to be able to combine a lot of learnings from over the years to make Jets. Hope you like Jets and give it a try. Also if you find Jets interesting, please give it ⭐️ it on GitHub. 👍