CircleCI is one of my goto hosted Continuous Integration, CI, providers. They make it very easy to quickly connect your GitHub account and set up CI. This story covers how to set up Continuous Deployment to ECS on CircleCI.

The example project with complete source code is available at tongueroo/hi in the circle-ecs branch. A few things to note:

Let’s clone the project and check out the branch to see if you can ship to ECS properly. A thorough guide of how to use ufo is provided here: Easily Build Docker Images and Ship Containers to AWS ECS. Here is a summary of the commands so we can focus on getting the deployment working on CircleCI quickly.

This deploys the hi-web service to the stag ECS cluster.

In order to allow CircleCI to deploy to ECS, you need to configure the AWS credentials. Click on the gear icon next to the project name in your project listings:

Save your AWS Key that has ability to deploy to ECS under AWS Permissions: 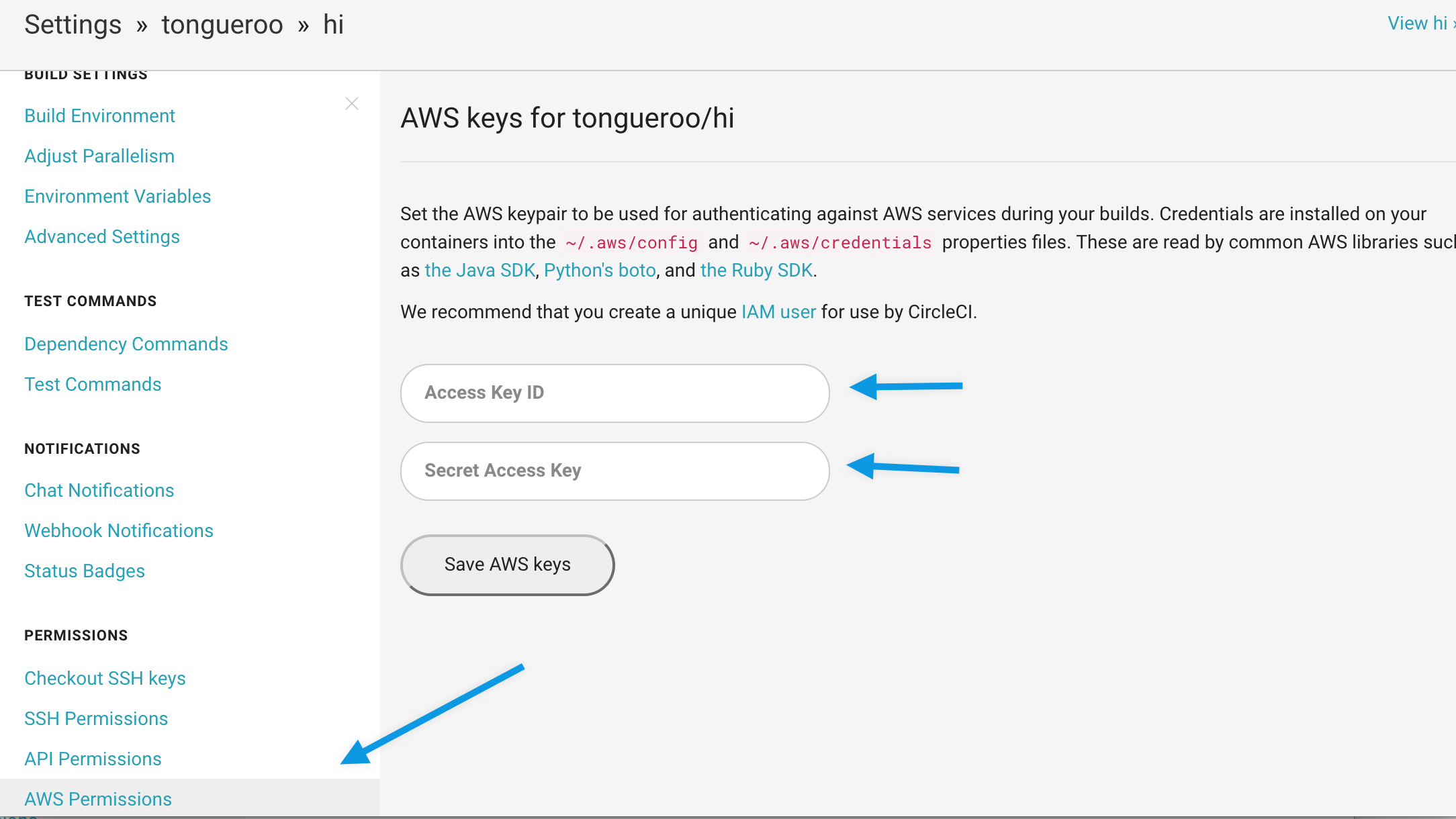 Add a circle.yml to your project with the following.

In the dependencies/pre section, the ufo tool is installed.

In the test/override section, the ufo tool is used to to build the docker container because it will generate a Docker image with a nice timestamped tag so we know exactly what image was deployed. Here’s an example of the ufo docker build command in action:

In the deployment/staging section, the branch option is set to circle-ecs because that is the branch which I have the test code in. You should change it for your purposes. You can see that the deployment command is simply: ufo ship hi-web –cluster stag –no-docker. The –no-docker option is provided to ufo so that ufo ship will use the last Docker image that was built by ufo instead of generating a new one. This ensures that we deploy the exact same image that was tested successfully to the ECS service. Now onto verification. For all the options for ufo ship use ufo help ship.

Verify Deployment of CircleCI to ECS

Verify by pushing the project with the circle.yml file to GitHub.

You should see the build run and at the end of the build the ECS deployment go through. If you have trouble getting CircleCI to deploy, try to ssh into the machine to debug it. Using ssh on CircleCI to debug covered in detailed here: Continuous Integration Provider Killer Debugging Feature: ssh login.

Let’s verify that the Docker image tag that was deployed on ECS matches the one that was generated in the CircleCI build. 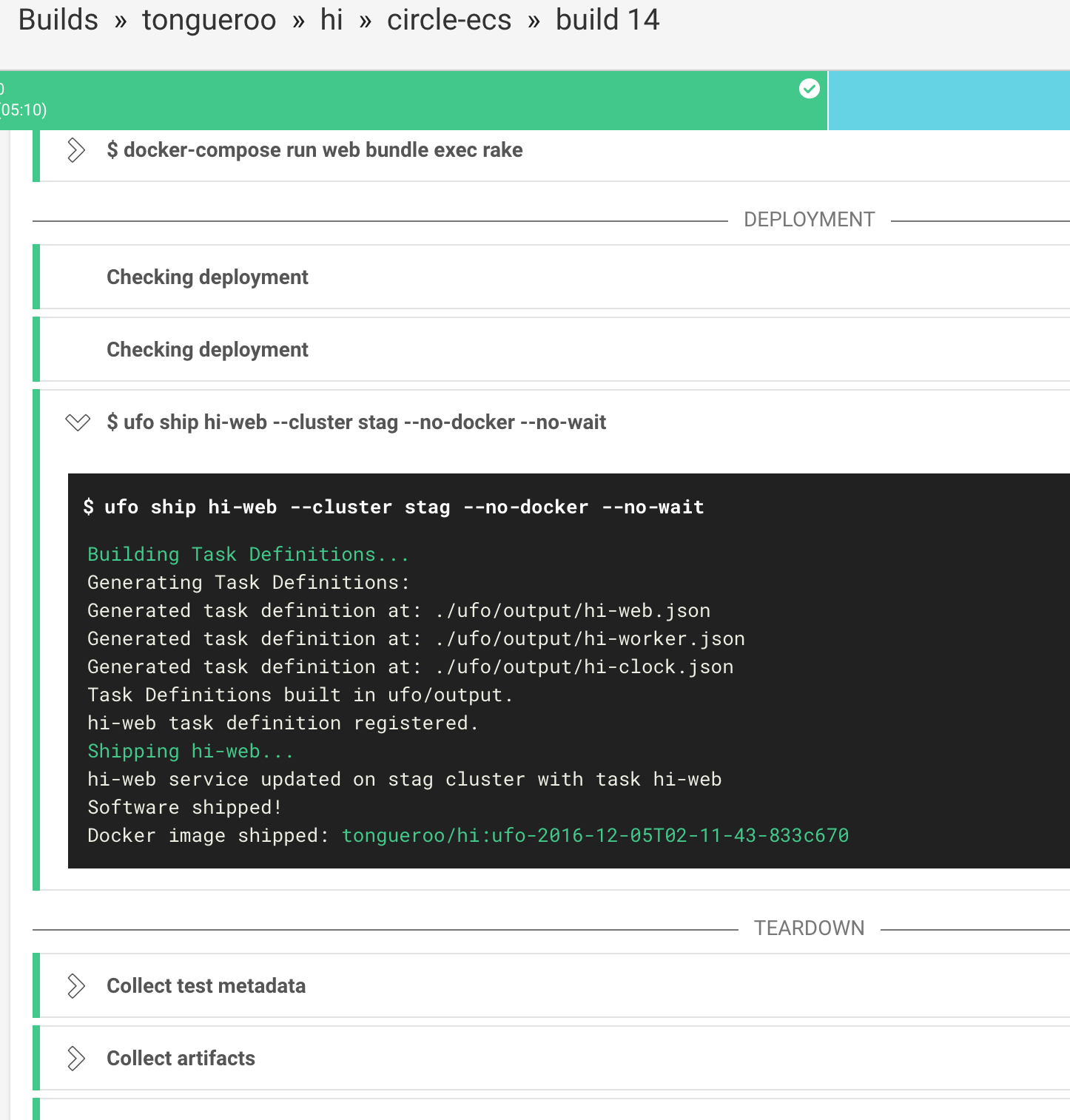 You can verify from the ECS Console and check the Task Definition that was deployed to the ECS hi-web service. 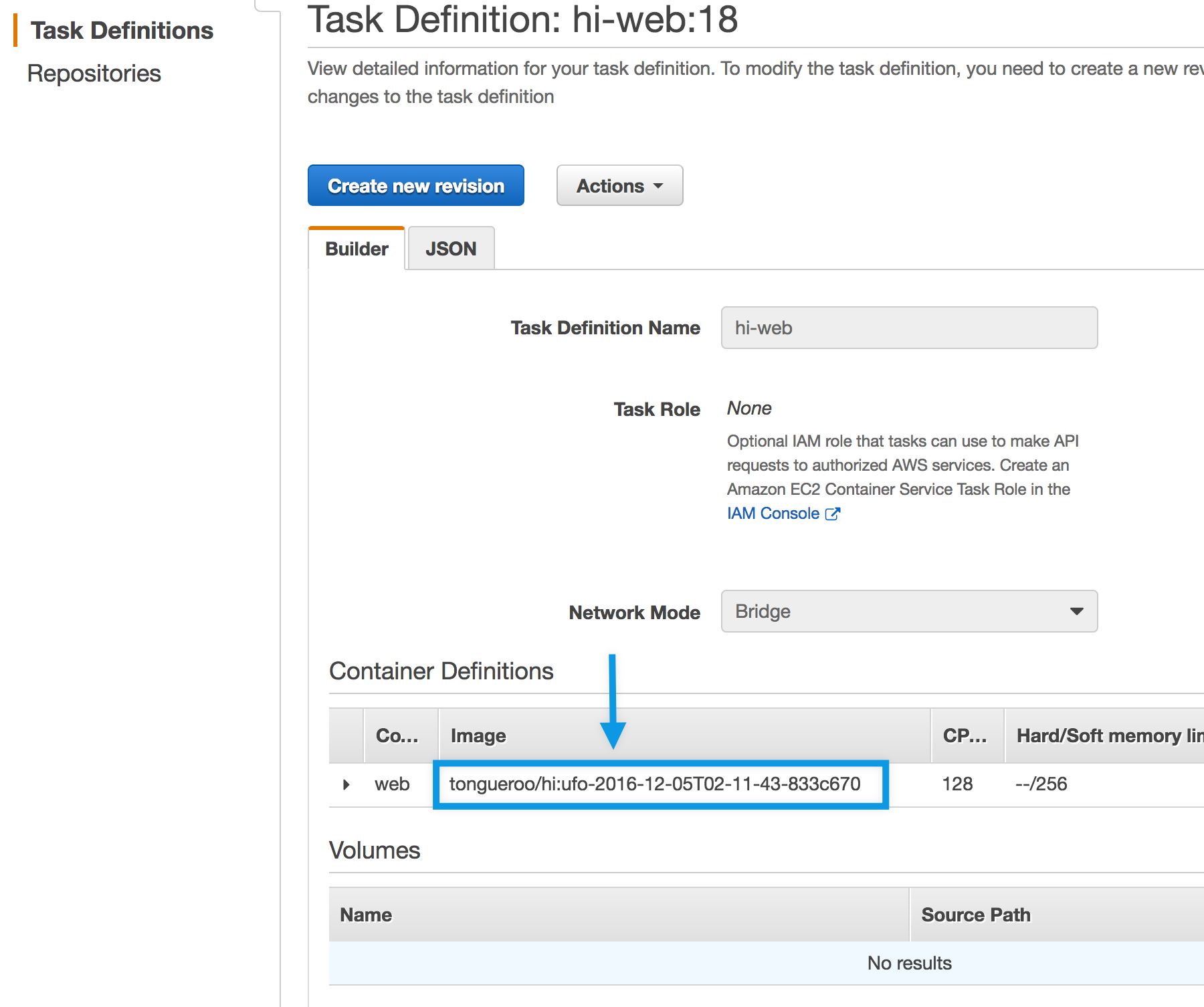 That is all you have to do in order to get deployments to ECS via CircleCI. CircleCI also provides their own documentation on how to deploy to ECS. Hope this helps!