ECS is the AWS Docker container service that handles the orchestration and provisioning of Docker containers. This is a beginner level introduction to AWS ECS. I’ve seen some nightmare posts and some glowing reviews about the ECS service, so I knew it was going to interesting to get my hands dirty and see what ECS was all about.

In this tutorial example, I will create a small Sinatra web service that prints the meaning of life: 42.

The ECS First Run Wizard provided in the Getting Started with Amazon ECS documentation performs the similar above with a CloudFormation template and ECS API calls. I’m doing it out step by step because I believe it better helped me understand the ECS components.

Before creating a cluster, let’s create a security group called my-ecs-sg that we’ll use.

Now create an ECS Cluster called my-cluster and the ec2 instance that belongs to the ECS Cluster. Use the my-ecs-sg security group that was created. You can get the id of the security group from the EC2 Console / Network & Security / Security Groups. It is important to select a Key pair so you can ssh into the instance later to verify things are working.

For the Networking VPC settings, I used the default VPC and all the Subnets associated with the account to keep this tutorial simple. For the IAM Role use ecsInstanceRole. If ecsInstanceRole does not yet exist, create it per AWS docs. All the settings are provided in the screenshot. You will need to change the settings according to your account and default VPC and Subnets values. 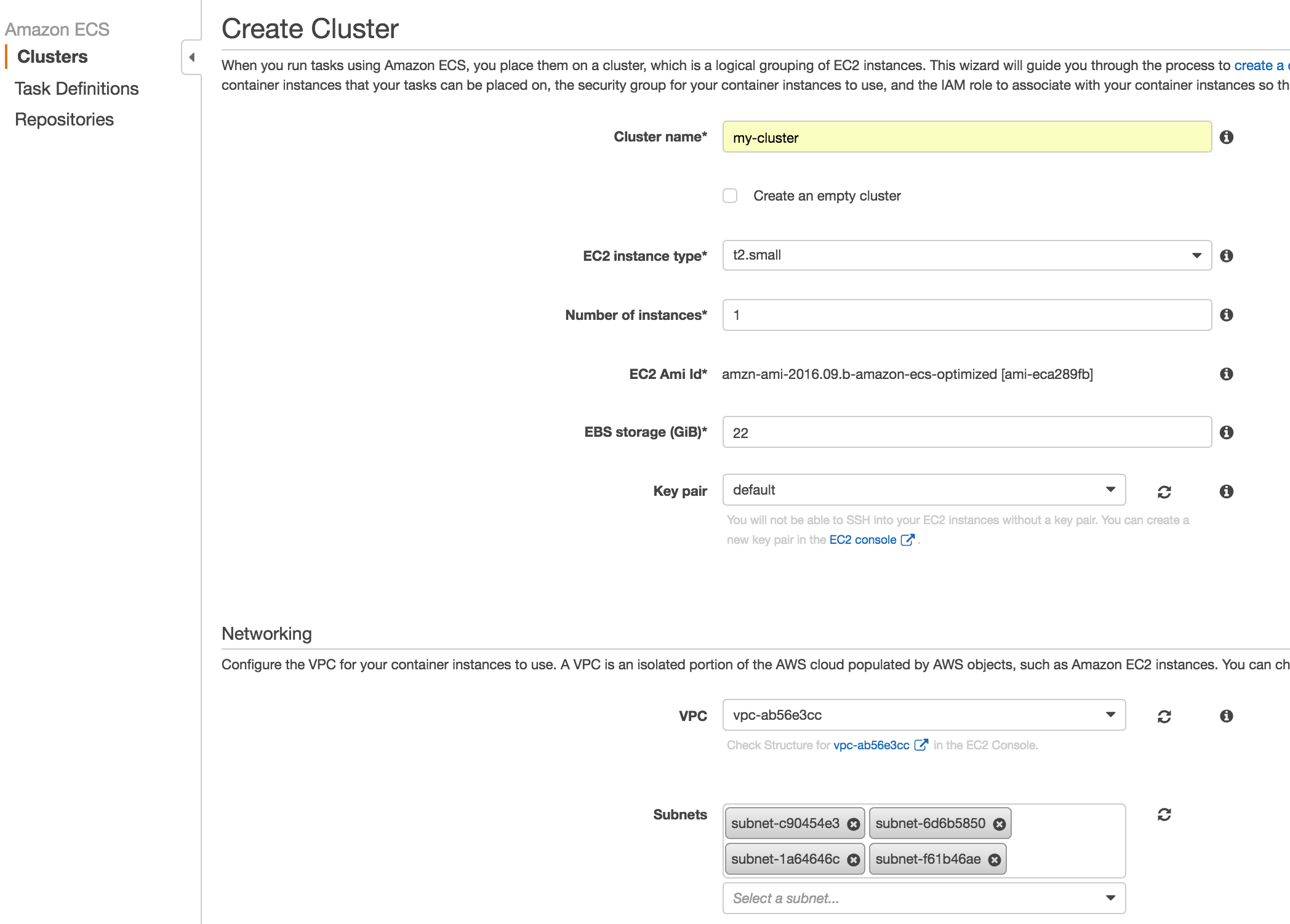 Wait a few minutes and the confirm that the Container Instance has successfully registered to the my-cluster ECS cluster. You can confirm it by clicking on the ECS Instances tab under Clusters / my-cluster.

2. Create a task definition that will be blueprint to start a Sinatra app

Before creating the task definition, find a sinatra docker image to use and test that it’s working. I’m using the tongueroo/sinatra image.

Above, I’ve started a container with the sinatra image and ran curl localhost:4657. Port 4567 is the default port that sinatra listens on, and it is exposed in the Dockerfile. It returns “42” as expected. Now that I’ve tested the sinatra image and verify that it works let’s create the task definition. Create a task-definition.json and add:

Confirm that the task definition successfully registered with the ECS Console:

3. Create an ELB and Target Group to later associate with the ECS Service

Now let’s create an ELB and a target group with it. We are creating an ELB because we eventually want to load balance requests across multiple containers and also want to expose the sinatra app to the internet for testing. The easiest way to create an ELB is with the EC2 Console. 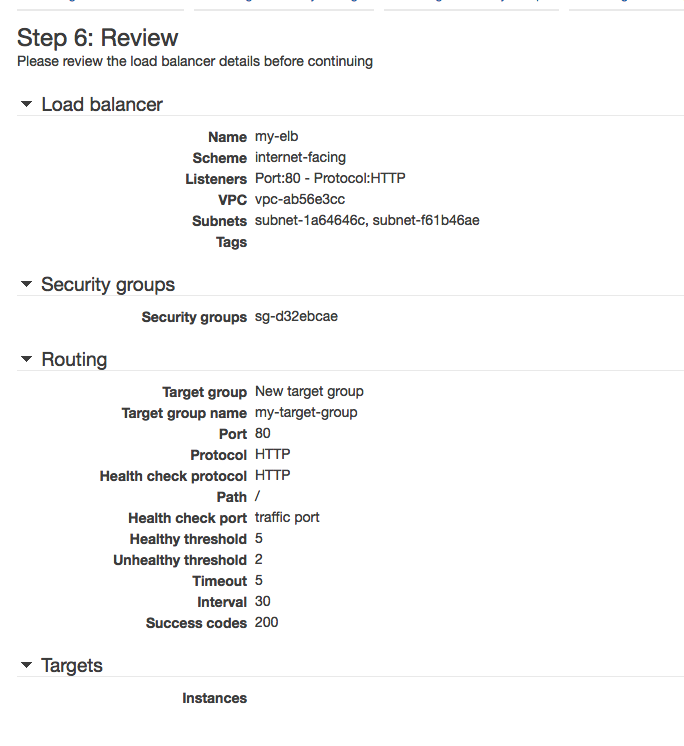 When we created the ELB with the wizard we opened, it’s my-elb-sg group port 80 to the world. We also need to make sure that the my-ecs-sg security group associated with the instance we launched in step 1 allows traffic from the ELB. We created the my-ecs-sg group in step 1 at the very beginning of this tutorial. To allow all ELB traffic to hit the container instance run the following:

Confirm the rules were added to the security groups via the EC2 Console:

With these security group rules, only port 80 on the ELB is exposed to the outside world and any traffic from the ELB going to a container instance with the my-ecs-group group is allowed. This a nice simple setup.

4. Create a Service that runs the Task Definition

The command to create the ECS service takes a few parameters so it is easier to use a JSON file as it’s input. Let’s create an ecs-service.json file with the following:

You will have to find your targetGroupArn created in step 3 when we created the ELB. To find the targetGroupArn you can go to the EC2 Console / Load Balancing / Target Groups and click on the my-target-group.

You can confirm that the container is running on the ECS Console. Go to Clusters / my-cluster / my-service and view the Tasks tab. 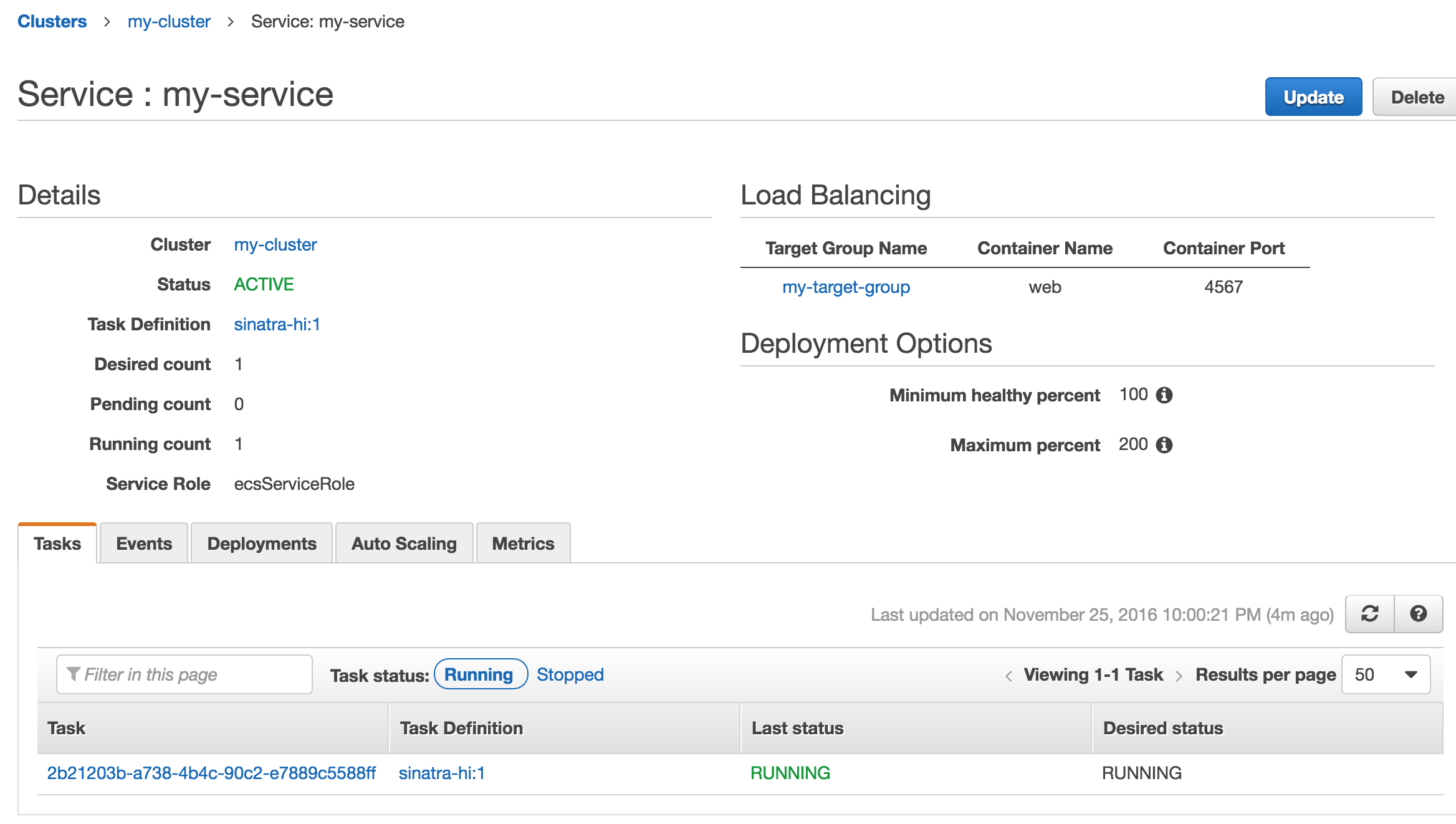 5. Confirm Everything is Working

Confirm that the service is running correctly. You want to be thorough about confirming that all is working by checking a few things.

Check that my-target-group is showing and maintaining healthy targets. Under Load Balancing / Target Groups, click on my-target-group and check the Targets tab. You should see a Target that is reporting healthy. 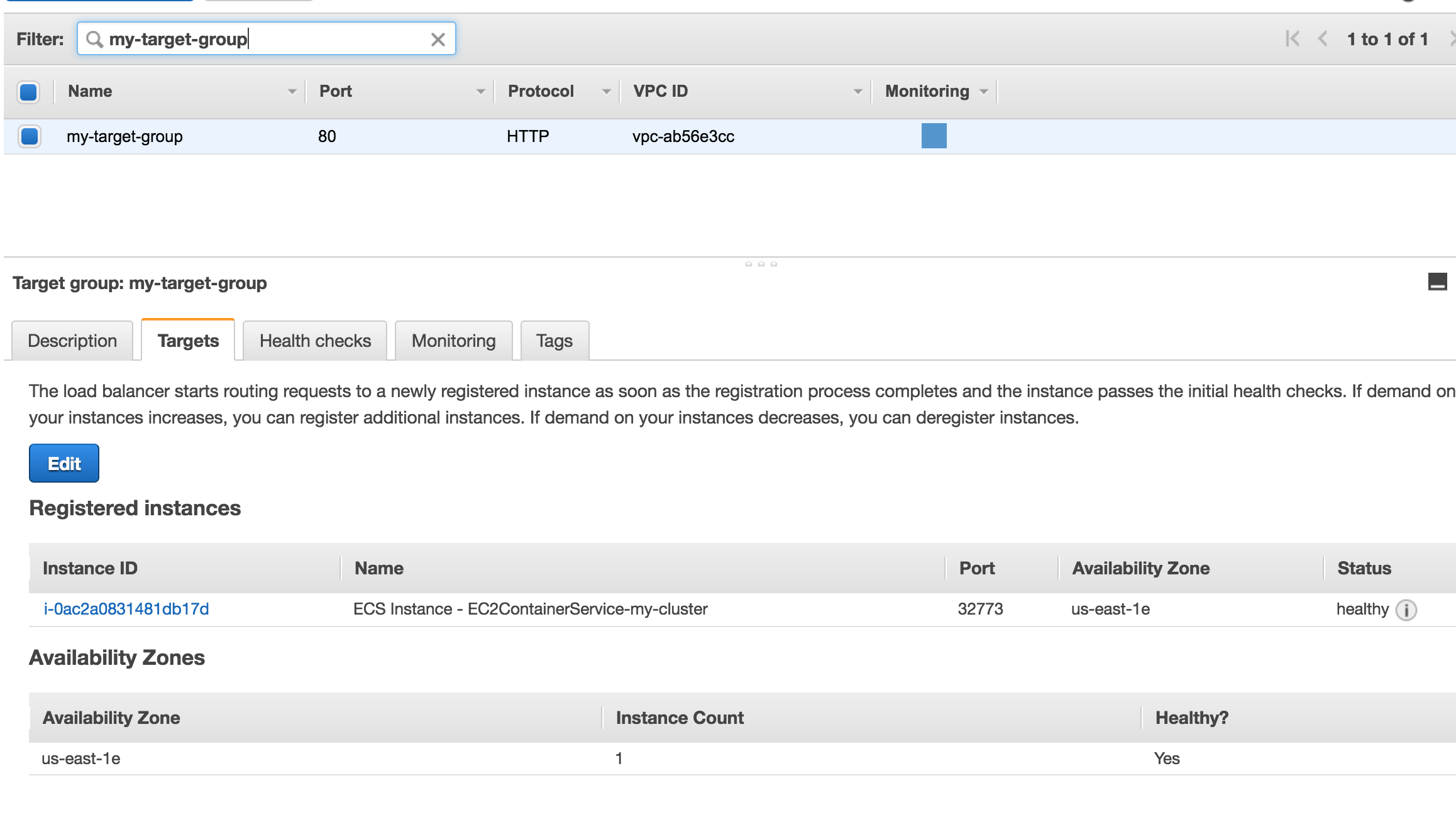 If the target is not healthy, check these likely issues: 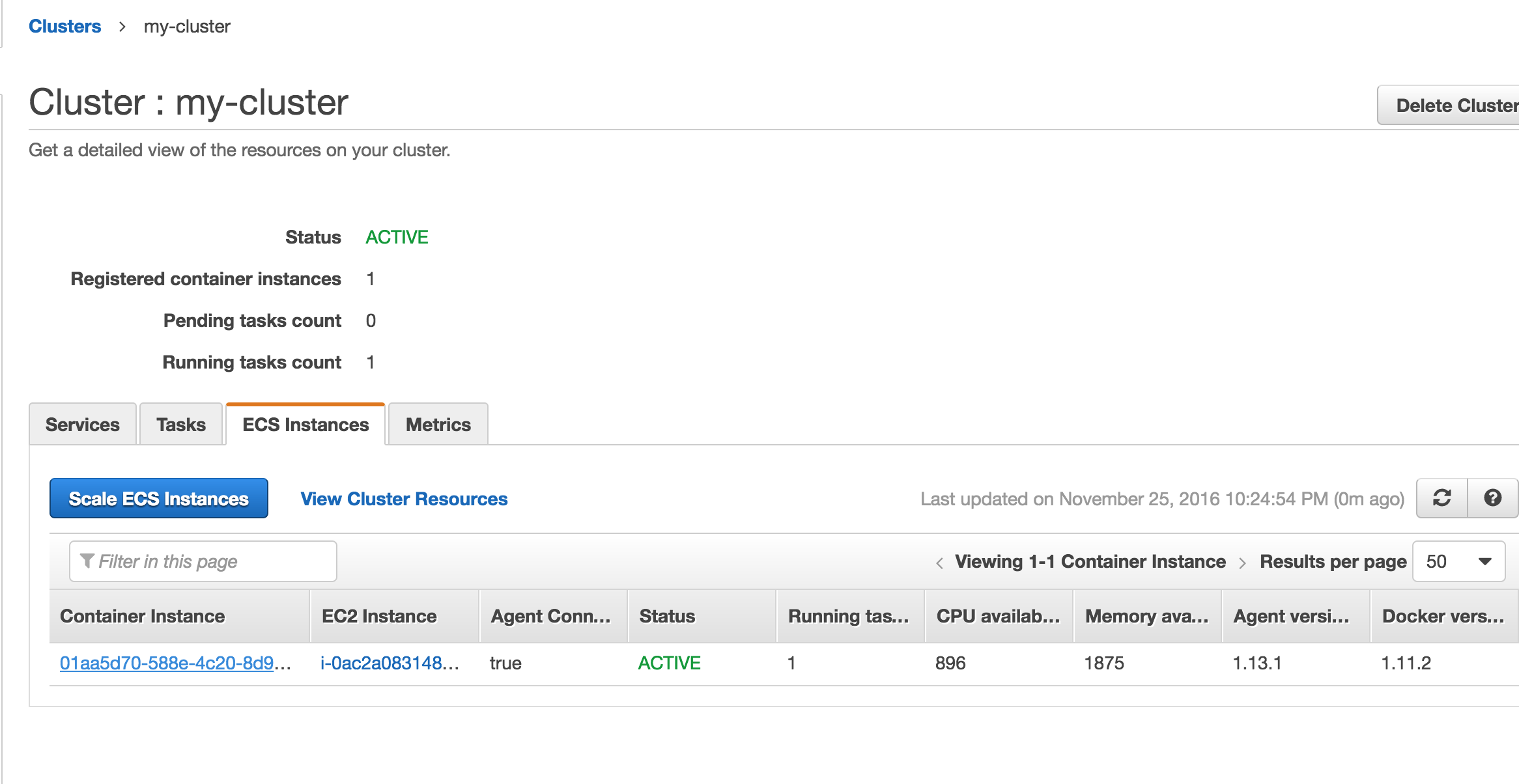 Above, I’ve verified that the docker container is running on the instance by curling the app and seeing a successful response with the “42” text.

Lastly, let’s also verify by hitting the external DNS address of the ELB. You can find the DNS address in the EC2 Console under Load Balancing / Load Balancers and clicking on my-elb. 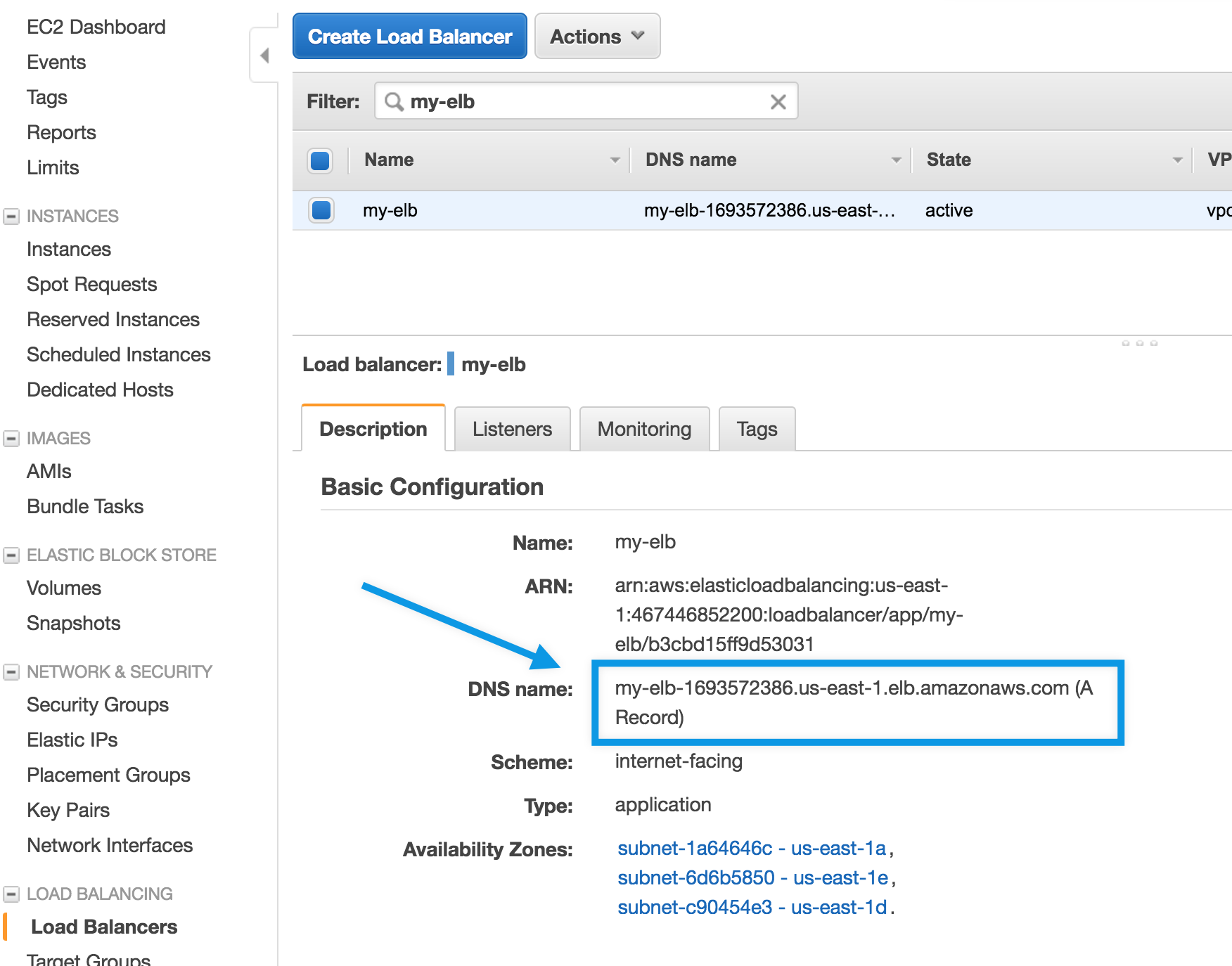 This is the easiest part. To scale up and add more containers go to Clusters / my-cluster / my-service and click on “Update Service”. You can change “Number of tasks” from 1 to 4 there. After only a few moments you should see 4 running tasks. That’s it!

It is quickest to use the EC2 Console to delete the following resources:

In this post, I covered the ECS terminology and went through a simple example to create a Sinatra app behind an ELB.

Overall, I think that ECS is a pretty fantastic service. It handles the hassle of managing Docker orchestration and provisioning.